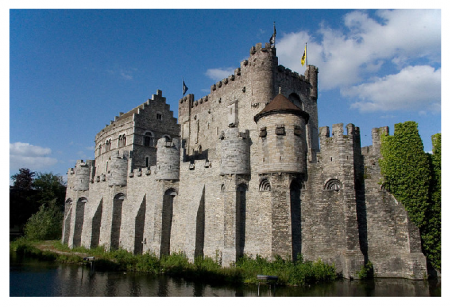 A castle is defined as a large building or a group of buildings fortified against attack with thick walls, battlements, towers, and in many cases a moat.

Over the centuries castles have been built not only in Europe and Asia but also in many other places around the world. For the most part, castles primary purpose was to avert attacks from oncoming enemies.

Today, many castles have survived the use of their medieval past and are now regarded as world heritage sites attracting thousands of tourists from different countries around the world.

Now, here is a list of the 5 top castles around the world that would give one cause to pause:

The Citadelle is sited on a large mountaintop fortress in Northern Haiti, about 17 miles (27 km) south of the city of Cap-Haititien.

It is the largest fortress in the Americas.  In 1982, it was designated by the United Nations Educational Scientific and Cultural Organization (UNESCO) as a World Heritage Site.

Spiš Castle was made a UNESCO heritage site in 1993. The castle is located in Eastern Slovakia and is one of the largest castle sites in Central Europe.

The castle was built in the 12th century and was the political, administrative, economic, and cultural center of Szepes County of the kingdom of Hungary. After a series of different family ownerships, it was finally passed on in 1945 to the state of Czechoslovakia then Slovakia.

This castle is located in Ghent, Belgium. In Dutch, the name means “castle of the counts.”

The castle was built in 1880 and served as the seat of the Counts of Flanders until they abandoned it in the 14th century.  Today, it is used as a major tourist attraction.

Built in the 11th century, the Krak des Chevaliers is located in Syria and is referred to as a crusader castle. It is said to be one of the most important preserved castles in the world. Today, it is recognized by UNESCO as a World Heritage Site.

This is one of the oldest and most preserved castles of Europe, Hohensalzburg (German for ”High Salzburg Fortress”) was built in the 11th century and expanded in the 14th century. It is located on a mountain in Salzburg. With a length of 250 meters (820 ft) and a width of 150 meers (490 ft), it is one of the largest medieval castles in Europe.