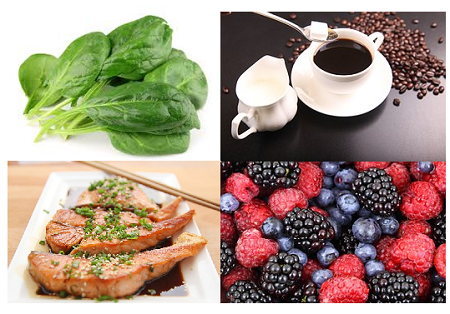 Today, more and more people are seeking to not only live longer, but also enjoy a better quality of life by maintaining a healthy lifestyle. Part of this involves watching what one eats.

Here now are 5 brain foods that one will do well to consider:

The green leafy vegetable is loaded with vitamins C and E, which, studies have shown, help to improve cognitive abilities.

Coffee and tea do more than keep you awake in the mornings. Studies have shown they may prevent Alzheimer’s disease and improve cognitive function.

Fish is high in vitamin B12 and may offer some protection against Alzheimer’s, research has shown.

One study has found that after 12 weeks of daily supplements of wild blueberry juice nine older adults who had started to experience slight memory problems showed better learning and recall abilities than a similar group of adults who didn’t take the supplements.

In addition, research has shown that fruits such as blueberries and strawberries, which are high in antioxidants, can decrease a type of stress in cells associated with aging and increase the signaling capabilities in brains.

Carrots have high levels of a compound called luteolin, which could reduce age-related memory deficits and inflammation in the brain, according to a study published in 2010 in the journal Nutrition.