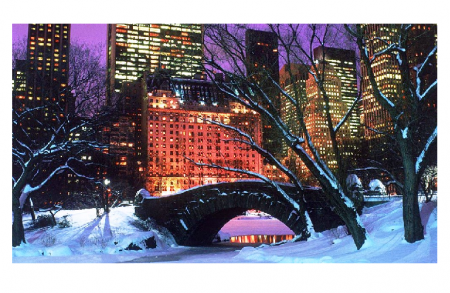 Christmas is a widely observed holiday, and it is that time of the year when people take time off to be with families and friends.

Consequently, it has become a popular time to travel not only to be with loved ones but also  to visit fun locations that may be more affordable during this special time of the year.

Now, here are five top destinations to visit during the Yuletide season.

One hand in the air for the big city,

No place in the world that can compare

Put your lighter in the air, everybody in say yeah…

New York City does not only buzz with activities and generate special and unique attractions during the Christmas holiday but it is also filled with glitz and glamour that is hard to match by any other place around the globe.

In addition to the shopping spree, New York City boasts some of the world’s most recognizable and cherished landmarks such as Times Square, Central Park, Empire State Building and The Metropolitan Museum of Art, all of which boomed with activities especially at Christmastime.

Consistent with the season’s various events is, of course, the dazzling giant Christmas tree at Rockefeller Center which has taken on a life of its own attracting thousands of tourists and locals to the lighting ceremony, musical performances, as well as ice skating.

The Radio City Christmas Spectacular is also another added attraction for visitors.

Moreover, at this time of the year the shops are aglow with festive window displays and a wide range of decorations. Lightings of of various crafts and designs can also be seen on display throughout the city.

Although Manhattan seems to represent the center of activities, one could easily travel to any of the other boroughs – The Bronx, Brooklyn, Queens and Staten Island to participate  in the numerous christmas traditions that these places all have to offer.

How still we see thee lie

Above thy deep and dreamless sleep

The silent stars go by

Yet in thy dark streets shineth

The hopes and fears of all the years

Are met in thee tonight

Following a pilgrimage to Israel in 1868, Rector Brooks penned the lyrics to the song entitled, O Little Town Of Bethlehem. It is a well-known hymn, and one would be hard pressed not to hear it sang as part of the repertoire of Christmas songs during the holiday season.

Visiting Bethlehem is the closest one will get to the heart and origin of the Christian faith. This is especially more significant during the time of Christmas as this is when the birth of Jesus is celebrated.

The Hebrew Bible identifies Bethlehem as the city of David while The New Testament references it as the birthplace of Jesus.

The city has had a storied and sullied history of war, foreign occupation, economic turmoil, and peace.

Today, for one reason or the other, Bethlehem is the center and focus of billions of people around the world and many Christians make their pilgrimage to the city during the Christmastime holiday to pay homage to their faith.

In Bethlehem, during Christmas, the Church of the Nativity is adorned with flags and decorations as well as crowded with locals and visitors alike. There is also a horde of separate church services.

In addition, Manger Square which is outside the Church of the Nativity, one will enjoy a festive atmosphere of carol singing, candle light parades, marching bands, folklore dance, and live music.

In the Square, one will also find a huge well lit Christmas tree, various street decorations, and lightings that reflect the manger scene.

There is also the open market that offers a range of local food products, traditional handcrafts, and various types of souvenir trinkets.

Looking for a place that is more solemn and far from the hustle and bustle of a Christmas frenzy, well, Rome is the perfect destination.

Rome is where the celebration of Christmas originated. In fact, the first Christmas mass was said at the Church of Santa Maria Maggiore and the earliest known permanent nativity scene was created for the Rome Jubilee in 1300.

There are a number of different places to see during the Yuletide season in Rome. These include:

The main streets of Rome at this time are also decorated with lights and there is musical entertainment, ice skating, choir performances, religious parades, and the selling of roasted chestnuts by vendors.

It is said that the best time to visit Jamaica is during the Christmas season. The hospitality of the natives at this time of the year is unmatched or unparalleled.

The country, a former colony of England, inherits most of its Christmas traditions from it.

Christmas is the most festive season of the year in the island. It is filled with non-stop celebrations, entertainment, parties, festivals, and the gathering of family and friends.

The celebration of the Yuletide season includes:

In addition, town centers boast of dazzling Christmas trees, houses as well as shopping malls are brightly decorated with lights and there are also house and office parties, stage shows, Christmas plays, and the National Pantomime.

Although in general people tend to look to Europe for an exquisite holiday especially during the Christmas season, other places are now popping up on the radar of travel enthusiasts.

One of these places is the unassuming city of Colombia called Medellin. Here, Christmas is celebrated as nowhere else around the world. It is one of the most extroverted city during the holidays and Christmas more so.

The entire city is adorned with Christmas lights – this includes the major thoroughfares, roads, parks, and the Medellin River.

In fact, Over 16 million lights twinkle from the city skyline between December and early January. Christmas lights are designed to create unique themes throughout the city. This fantastic array of designs and colors makes the entire city a wonderland.

In addition, there is the pyrotechnic light displays over the Santa Elena River, rainbow colored water fountains, lively street parties and a giant 79-foot Christmas tree.

Moreover, tourists and locals flock the city to to see the sites and to enjoy the hundreds of different events and activities.