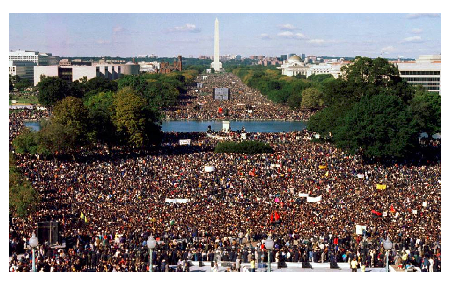 The Million Man March celebrated its 20th anniversary with another march on Washington on October 10; however, with much less fanfare and media hype than when it was initiated and African American men gathered en masse at the same venue on October 16, 1995.

Again, the march was being led by Louis Farrakhan, who at the age of 82, could be easily described as an elder statesman.

Minister Farrakhan, who is the leader of the Nation of Islam in his wide ranging address that lasted for nearly two hours, challenged the crowd of largely minority to work to improve themselves and pledge their faith in God.

“There’s no government on this earth, not one, that can give the people what the people desire of freedom, justice and equality,” he said. “You are yearning for something the government can’t give you,” Farrakan posited

There were also many other speakers who raised the topics of black struggles, the racial divide, and injustice.

Many prominent black leaders such as Jesse Jackson and Al Sharpton were visibly missing from the stage this time around. The youths, however, were well represented as they made up a large percentage of the crowd that showed up at the march.

Black activist and member of the Queens Local Organizing Committee, Oster Bryan declared that it was an important march as it helps to give black people a voice.

“Without this gathering, black people are not human. Black people all over the world have been struggling for the past 400 to 500 years to reaffirm their dignity and “somebody-ness.” This gathering proves that we as a people still believe we deserve what every other group gets,” said Bryan.

He said people should walk away from the march with a collective understanding that it is time to act by building an independent black economy and actively engage in the education process.