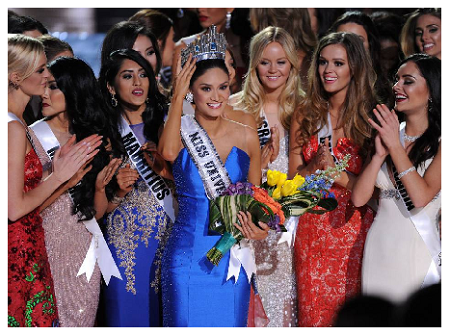 It would be comedy if not true. When Broderick Stephen “Steve” Harvey, former comedian now television host and radio personality, announced the name of the winner in the 2015 Miss Universe competition, it caught everyone off guard.

This was an awkward moment for not only the host, Mr. Harvey, but also the contestants.

The Colombian contestant Ariadna Gutierrez Arevalo was already wearing the 2015 Miss Universe crown as the winner after host Steve Harvey goofed up and had to return to the stage to apologize.

The fact is the title and crown belonged to the Miss Universe contestant from the Philippines, except for that brief moment Sunday evening, when it was given to the contestant from Colombia.

Harvey reportedly said he took full responsibility for the mistake in making the wrong call by naming Miss Colombia as the winner.

He continued while trying to hold back tears, “Please don’t hold it against the ladies. We feel so badly but it’s been a great night.”

The dumbstruck Miss Philippines was at a loss as she walked to the front of the stage alongside the crown-wearing Arevalo before last year’s Miss Universe from Colombia removed the crown and placed it on Miss Philippines Pia Alonzo Wurtzbach’s head instead.

“I’d like to apologize wholeheartedly to Miss Colombia & Miss Philippines for my huge mistake. I feel terrible,” the Family Feud host posted on Twitter shortly after the show. “Secondly, I’d like to apologize to the viewers at that I disappointed as well. Again it was an honest mistake. I don’t want to take away from this amazing night and pageant. As well as the wonderful contestants. They were all amazing.”

The competition started with women representing 80 countries between the ages of 19 and 27. For the first time, viewers at home weighed in, with their votes being tallied in addition to four in-person celebrity judges.