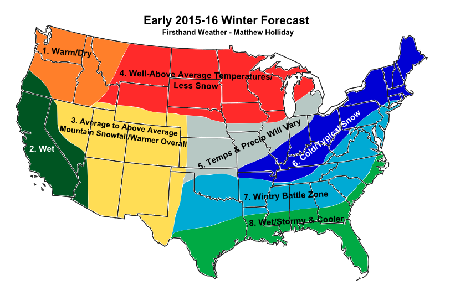 According to The Weather Channel, people who live in the South and East Coast should brace themselves for a colder than average winter this season.

On the other hand, the report noted that warmer-than-average temperatures are expected from the West Coast, the Northwest in particular, eastward into the Upper Midwest and interior sections of the Northeast.

The best chance for cold conditions in the East will come later in the winter.

El Niño is expected to play a large role in temperatures this winter, but strong blocking of the upper-level pattern over the North Atlantic Ocean that began this summer may also play an important role this winter.

“The strength and location or ‘flavor’ of the El Niño event suggests that a very warm 1982-83 or 1997-98 winters is quite possible,” Dr. Todd Crawford, WSI chief meteorologist, reportedly said.

“However, there is some risk of big blocking this winter, driven either by a premature weakening and westward shift (towards the dateline) of the El Niño impacts or by just a general tendency for stronger high-latitude blocking. While this blocking potential does add colder risks for the upcoming winter, we are still leaning towards a slightly cooler variation of the very warm 1982 and 1997 strong Niño events,” he added.

Crawford cited the European computer forecast model, as being of high repute, and noted that it “shows the focus of the ridging to be from western North America north to the pole, which implies colder risks for at least part of the eastern U.S. this winter, especially late.”

The Weather Channel has also stated that the warm pattern across much of the central and northeastern U.S. may continue into October. However, cold air will likely plunge into the central U.S. by late October, while the East and West coasts are expected to remain warm.

Furthermore, it said that the south-central U.S., from Arizona into the southern Plains, will likely see below-average temperatures overall in October. Otherwise, the remainder of the country will see above-average conditions with the East seeing well-above average temperatures.