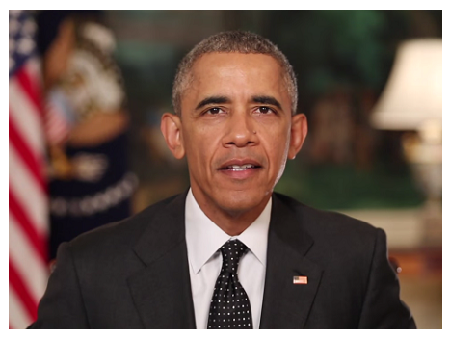 President Obama in his weekly address said, “For decades, too many working Americans went without the security of health insurance — and their financial well-being suffered because of it.”

He explained that his administration has brought about a change by introducing the Affordable Care Act which has resulted in the coverage of 17.6 million Americans.

“Since 2010, the uninsured rate has decreased by 45%. And for the first time, more than 90% of Americans are covered,” noted the President.

He encouraged those who have not received coverage to do so now as the open enrollment season for the Health Insurance Marketplace.

“What that means is, with a few clicks on HealthCare.gov, you’ll find private insurance companies competing for your business. You can compare plans and choose the one that’s right for your family. In fact, most Americans will find an option that costs less than $75 a month. Even if you already have insurance through the Marketplace, check it out. Shopping around can save you a lot of money — last year, consumers who shopped saved almost $400,” the President declared.

The President cited a story of Phil Viso, a software developer from Chicago who had had idea of a new app and decided to start his own company. Phil, the President said thought he would be in predicament in financing his own health insurance but only to find out that by logging on to HealthCare.gov, answered a few questions, he was able to pick up a plan which provided him with a tax credit that saved him money.

Here’s what he wrote, the President surmised, “I’m still sort of in shock about how great the experience of signing up for health care was…I will have a lot to worry about over the course of the year as I try to get my app released, but thankfully, good health care will not be one of those worries.”

He stated that the whole point of the health insurance is to provide one with peace mind and that under the Affordable Care Act, if one wants to change jobs, go back to school, or chase that new idea, you can do so without worrying about going broke if you get sick.

“What we’re talking about is no longer just a law, and it’s certainly not the myths and scare tactics that the cynics have peddled our way for years. This is reality. This is health care in America. And the bottom line is, Americans like it. They’re happy with their plans and their premiums,” he continued.

He concluded by encouraging people to check out HealthCare.gov, CuidadoDeSalud.gov, or call 1-800-318-2596 FREE to find a plan that’s right for them or someone they care about.