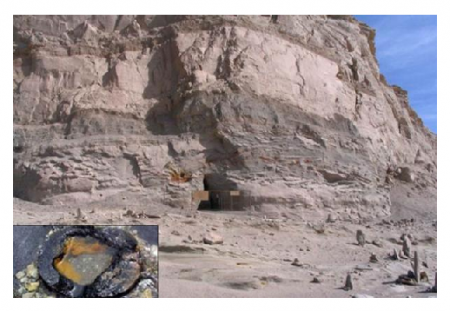 Oopart (out of place artifact) is a term applied to dozens of prehistoric objects found in various places around the world that seem to show a level of technological advancement incongruous with the times in which they were made. Ooparts often frustrate conventional scientists, delight adventurous investigators open to alternative theories, and spark debate.

In a mysterious pyramid in China’s Qinghai Province near Mount Baigong are three caves filled with pipes leading to a nearby salt-water lake. There are also pipes under the lake bed and on the shore. The iron pipes range in size, with some smaller than a toothpick. The strangest part is that they may be about 150,000 years old.

Dating done by the Beijing Institute of Geology determined these iron pipes were smelted about 150,000 years ago, if they were indeed made by humans, according to Brian Dunning of Skeptoid.com.

And if they were made by humans, history as it is commonly viewed would have to be re-evaluated.

The dating was done using thermoluminescence, a technique that determines how long ago crystalline mineral was exposed to sunlight or heated. Humans are only thought to have inhabited the region for the past 30,000 years. Even within the known history of the area, the only humans to inhabit the region were nomads whose lifestyle would not leave any such structures behind.

The state-run news agency Xinhua in China reported on the pyramid, the pipes, and the research began by a team scientists sent to investigate in 2002.