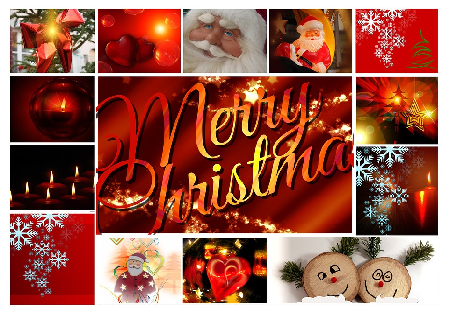 With so many cultures spanning the globe, and most of them celebrating Christmas, even to just a small degree, there are bound to be some interesting customs and traditions rolled up into this holy (and highly commercialized) day.

The first on our list goes to Japan. There was a hugely successful advertising campaign in the 70s for KFC, and now it has somehow become a bit of a tradition to head down to KFC and dig into some drumsticks as a Christmas celebration.

In Venezuela, a pretty darn cool tradition has developed in Caracas over the years, whereby locals travel to mass on roller-skates.  It became an event that caught on so quickly, that the city has now honored the tradition by closing streets down for the roller-happy church-goers to commute to morning mass.

In the Ukraine, it is more common to see a Christmas tree with what appears to be a spider web covering it, rather than brightly colored baubles and tinsel. The elaborate spider webs found on trees, generally fake spider webs, became a tradition after a local fable, which told the story of a poor family unable to decorate their tree, but waking up one Christmas morning to a beautiful tree decorated for them by a friendly spider. For those in search of love, head to the Czech Republic and try your luck at some shoe throwing. What is this you might ask? Well, on Christmas day local women face their backs toward their front doors and toss their left shoe over their shoulder. Strange? Well not, if you need answers in the area of love! If the toe of the shoe falls facing the door, you are in for a year of red roses and love hearts, if it doesn’t…. well, let’s just say that there are many tears lost.

In Germany, parents hide a pickle (of all things!) in their Christmas tree, and when the kids wake up and rush over to see what Santa brought them in the morning, the first child to find the pickle gets an extra gift to open.

In Italy, traditionally children do not get a visit from Santa Claus but rather from the friendly witch named Befana. Befana arrives overnight on her broomstick and quietly leaves kids a delivery of toys and candy. Benafa does not interfere with Santa Claus’ special day however, instead she arrives on January 5th.

In Greece, a scary tradition and myth exists whereby the twelve days of Christmas are thought to wreak havoc as the Kallikantzaroi goblin is said to lurk around every corner. Scary stuff!!

In South Africa, there also exists another scary tale to terrify the living daylights out of both kids and adults alike. The story of Danny. The story of a young boy who angers his grandmother so much by eating the cookies that had been left out for Santa Claus, that she kills him in an uncontrollable rage. It is now said that Danny’s spirit haunts many homes at Christmas time.

In Canada, Canada Post recognizes Santa’s address of “The North Pole” and all letters received are opened and replied to each year, no matter how many.

In Latvia, Christmas almost seems like Halloween. Groups of people will dress in costumes of all kinds and travel door-to-door to receive treats, and in return they give a Christmas blessing to the family in that home.

Many kids around the world prefer getting toys and electronics for Christmas. Many consider clothes boring, and perhaps not “real” gifts. However, the children of Iceland welcome clothes more than any other children on Christmas day. Apparently, the mythical Yule Cat is said to stalk the hills of Iceland on Christmas day, and those who do not receive clothes before Christmas eve will be devoured by the mythical cat.

In Norway, all brooms must be safely hidden away. If a broom is left out it could be stolen by a witch or an evil spirit, making Christmas a little scarier than planned! So strictly no cleaning allowed on Christmas day in Norway!

In Guatemala, Christmas Eve is pretty much spent “spring cleaning”.  Before Christmas day, locals must sweep out their homes and get rid of what is no longer useful, dropping it on top of the neighborhood Christmas bonfire. Each neighborhood creates a large bonfire with the effigy of the devil placed on top, to burn all the old stuff (and the old year) away, in preparation for a clean and happy new year.