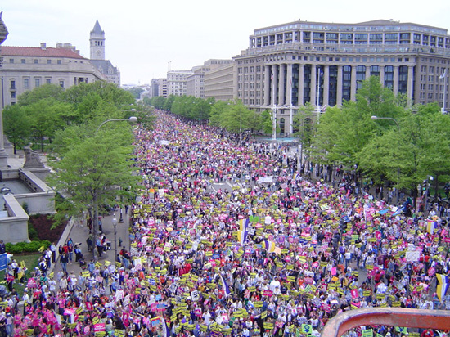 President Trump is already feeling the heat of public outrage and in particular from women.

Thousands of women marched on Washington and in cities across the country rallying against President Trump’s stated agenda.

Many protesters wore pointy-eared “pussyhats,” carried signs protesting various aspects of the new administration’s plans, and chanted, “Welcome to your first day, we will never go away.”

Now, here are 10 takeaways from news on the march:

2. Over 200 protesters were arrested

3. Trump tweeted on the act: “Watched protests yesterday but was under the impression that we just had an election! Why didn’t these people vote? Celebs hurt cause badly”

4. Metro officials announced that it was the second-busiest day in the Washington subway system’s history, with 1,001,613 trips

5. The Washington demonstration was amplified by gatherings around the world, with march organizers listing more than 670 events nationwide and overseas in cities including Tel Aviv, Barcelona, Mexico City, Berlin and Yellowknife in Canada’s Northwest Territories, where the temperature was 6 degrees below zero

6. Gloria Marie Steinem the 82-year-old American feminist, journalist, and social and political activist noted, “This is the upside of the downside.” Additionally, she said, “This is an outpouring of democracy like I’ve never seen in my very long life.”

7. Hillary Clinton tweeted thus: “Thanks for standing, speaking & marching for our values @womensmarch. Important as ever. I truly believe we’re always stronger together.”

10. “Yes, I am angry,” Madonna said. “Yes, I am outraged. Yes, I have thought an awful lot about blowing up the White House”