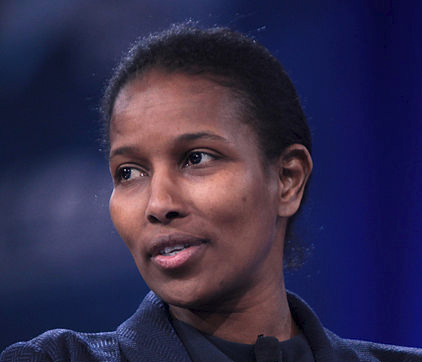 Ayaan Hirsi Ali, the 47-year- old, Somali-born, author, and former politician, is not only marked for death by fundamentalist Muslim fanatics but also is one of the most sought-after speakers by different groups within civil society.

“My father, the man who is responsible for my education, taught me that Islam, quietly understood, is a religion of philosophy of peace,” said Ayaan in her opening remarks in a debate on the topic, Is Islam a religion of violence or peace?

Ayaan Hirsi Ali, the former Muslim and author of the book titled “Infidel,” however, was not about to play ball or take any prisoners in her discourse on the topic.

This militant and charming rebel, blessed with good looks and lots of smarts, is renowned for her fight against Islamic fundamentalists which she believes is not only inherently violent in nature but allows for the subjugation and abuse of women.

There are many reasons she disagrees with her father’s view that Islam is a religion of peace. She has also rejected the notion that for there to be a peaceful and prosperous society one needs to institute the rule of God or Sharia law.

Below are 10 reasons Ayaan has given as her take  on why Islam is a religion of violence, not peace:

1) Contrary to her father’s view, she posited that the United States and the Netherlands are examples of two prosperous and peaceful countries with man-made laws and constitutions, not Sharia law or the rule of God.

2) The amount of security deployed for her protection because she dared to critique the Muslim faith and called for its reformation.

3) The wanton killing of the people at the Westgate Mall in Nairobi by five Somali men invoking the name of Allah and Mohammed to justify their horrid act.

4) The killing of innocent people under the banner of Muslim in Kenya, one of the most hospitable countries to her compatriots fleeing their country.

5) Men and women killed in Iraq while worshipping by suicide bombers invoking the name of Allah and Mohammed.

6) Thousands of people who die in Syria as a result of a proxy war between Islam’s two most important and influential nations, Saudi Arabia with its Sunni sect and the Shiite Islamic Republic of Iran.

7) Reports of the destruction of churches, pillaging of Christian property, rape of Christian women, and the terrible exodus of Christians and other religious minorities from Muslim countries by men who invoke the name of Mohammed and extol the holy Koran.

8) The teenage girl who was shot at point blank in Pakistan because of her quest to obtain an education — a despicable act by a man invoking the name of Allah and Mohammed.

9) Muslim women are forbidden to drive and own their reproductive rights as well as prevented from doing anything unless sanctioned by their male guardians.

10) The reading and studying of the history of the founding documents and the life of its founder Mohammed left much to be desired and to commend the faith given its inconsistencies and intolerance towards others.