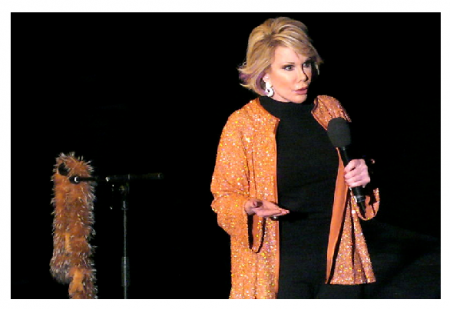 1. “When I die, I want my funeral to be a huge showbiz affair with lights, cameras, action…I want Craft services, I want paparazzi and I want publicists making a scene! I want it to be Hollywood all the way. I don’t want some rabbi rambling on; I want Meryl Streep crying, in five different accents. I don’t want a eulogy; I want Bobby Vinton to pick up my head and sing “Mr. Lonely.” I want to look gorgeous, better dead than I do alive. I want to be buried in a Valentino gown and I want Harry Winston to make me a toe tag. And I want a wind machine so that even in the casket my hair is blowing just like Beyoncé’s.”

2. “I hate people who try to make you feel better. Like the neighbor who says, ‘Don’t forget, the first part of ‘funeral’ is ‘fun!’ Or the minister who says, ‘He’s in a better place now.’ I’m tempted to yell out, ‘No he’s not. He had a house in the Hamptons. What’s wrong with you?”

3. “Yesterday is history, tomorrow is a mystery, today is God’s gift, that’s why we call it the present.”

4. “I don’t exercise. If God had wanted me to bend over, he would have put diamonds on the floor.”

6. “I’ve learned from my dealings with Johnny Carson that no matter what kind of friendship you think you have with people you’re working with, when the chips are down, it’s all about business.”

7. “I blame my mother for my poor sex life. All she told me was ‘the man goes on top and the woman underneath.’ For three years my husband and I slept in bunk beds.”

8. “A man can sleep around, no questions asked, but if a woman makes nineteen or twenty mistakes she’s a tramp.”

9.”Anyone that says looks don’t count is lying. Of course they do. Even babies go to the attractive face. It’s the way humans work.”

10. “Elizabeth Taylor has more chins than the Chinese telephone directory.”