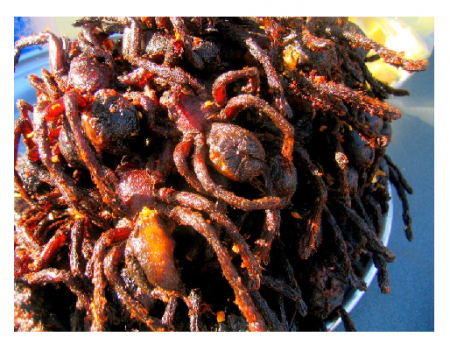 “Do we really want to travel in hermetically sealed pope mobiles through the rural provinces of France, Mexico and the Far East, eating only in Hard Rock Cafes and McDonalds? Or do we want to eat without fear, tearing into the local stew, the humble taqueria’s mystery meat, the sincerely offered gift of a lightly grilled fish head? I know what I want. I want it all. I want to try everything once.”
― Anthony Bourdain.

“I hate people who are not serious about meals. It is so shallow of them.”
― Oscar Wilde.

On planning to travel overseas, one should not only go for sightseeing, frolicking, and fun, but also to learn a little about the culture of the country being visited. Part of that is to indulge in eating the food of the local people.

However, there are some foods that may not be for the faint of heart. Here are some:

This fruit is so odorous that it is illegal to carry on public transportation in some countries. The smell of the fruit is said to be like that of raw sewage.

It is one of the fruits of choice in countries such as Thailand, Malaysia, Philippines, and Brunei. This is plain and simple raw-frog chopped, sliced, and diced to make a tasty and delicious meal. This delicacy can be had from select restaurants in Japan.

This is the dish of choice among many countries in Europe and Asia. It is a sausage made of blood and fillers of grains, potatoes, or fats. This is a Cambodian delicacy served with lime and black pepper dip. These are said to be loaded with proteins and are fast becoming a delicacy in many different parts of the world. It is a delicacy in Uganda and Mexico.

These are silkworm pupae that are served as a popular snack food in Korean cuisine.

These eggs are not as the name suggest stored for 100 years but believe it or not they are stored in in a mixture of clay, ash, salt, quicklime, and rice hulls for several weeks to several months, depending on the method of processing. These are served as part of a Chinese cuisine.

This is a term used in Australia for the large, white, wood-eating larvae of several moths. They are edible either raw or lightly cooked in hot ashes. They are also said to be protein packed and are mainly eaten by indigenous Australians.

This is a Korean dish of octopus cut into small pieces and served while the tentacles are still squirming. The active suction cups can cause swallowed pieces of arm to stick to the mouth or throat. This can also present a choking hazard for some people, particularly if they are intoxicated.

These are are edible larvae and pupae of ants. They are harvested from the roots of the Agave tequilana or Agave americana plants in Mexico. Mexicans referred to this unusual snack as “insect caviar.”