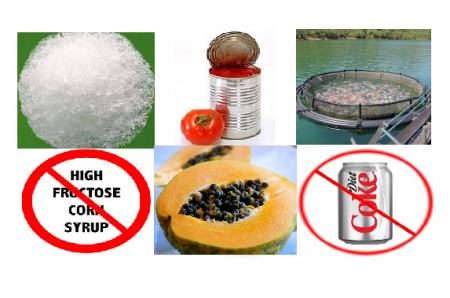 In a society loaded with conveniences, it’s not surprising that a lot of the foods that are made for mass production aren’t necessarily good for you. In too many instances, fast food turns out to be more dangerous to your health.

Monosodium Glutamate is also called a flavor enhancer that used to be a staple in Chinese food. Because it makes the taste buds more receptive to flavor; it’s found in a variety of foods, including canned foods, and the FDA requires it to be listed on food labels. There are some people who experience adverse reactions to MSG including headache and nausea but  in some animal studies, MSG caused the pancreas to produce more insulin.

Farmed salmon,  often labeled “Atlantic Salmon,”  is fed an unnatural diet of grains and antibiotics. The result is grayish flesh with less of the natural nutrients usually present in salmon. Look for those labeled “Alaskan” or “sockeye” salmon instead, which are wild and naturally pink.

To increase milk production, some companies inject cows with the synthetic version of a hormone that’s naturally produced in the cow’s pituitary gland. In some markets, it’s labeled as “Posilac,” which has been banned in over two dozen nations because of increased cancer risk.

Many shoppers think that bright pink color of chicken means that it’s fresh. However, some arsenic-based drugs are approved for animal ingestion because it produces that pink color. The problem is that whether it’s organic or inorganic, the body sees both as arsenic, which is a poison.

Beef that’s fed anything other than grass, which is what they are supposed to eat, has lower nutritional value. It is fattier and has lower concentrations of essential nutrients such as omega-3 fatty acids, which are present in beef from grass-fed cows.

Canned tomatoes need resin linings so companies use bisphenol-A, BPA. It’s a resin that has hormone-like properties and has been reported to have negative effects on fetuses and newborns.

HFCS, high fructose corn syrup, has been a staple in many mass produced foods since the 1970’s. The problem is that it turns off the body’s ability to realize that it’s full, causing people to eat more than necessary.

Papaya is a great food to eat, especially if you’re having digestion issues. However, the papaya in Hawaii is genetically modified to be resistant to the ringspot virus. The problem is that there have been more than a dozen studies showing that animals that consume GMO foods experienced organ damage, birth defects and sterility.

9. Foods with Artificial Colors and Dyes

Anything on a food label with a color and a number after it is an artificial food dye. These kinds of foods are banned in Norway and Austria and the European Union requires warning labels on foods with dyes.

Many soda lovers believe that just because they are drinking diet sodas that means they’re being healthier. But a study from 1989 showed that aspartame, an artificial sweetener used in diet sodas degrades into formaldehyde under certain conditions.